The Cocoa and Coffee Advisory Board of Côte d’Ivoire has tightened the regulatory procedure for purchasing cocoa in order to stifle speculation in the market. According to a recent communique, local buyers need to present a sales contract 6 days after a successful bid on the daily cocoa market auction. Local buyers are typically exporters and cooperatives. If buyers are not able to show a sales contract within the 6-day limit then the successful bid will be cancelled and the cocoa beans resold on the market before the start of the season. Buyers will also be suspended from auctions for one month. Additionally, buyers will be liable to a penalty of 15 CFA francs per kilogram if the beans from the cancelled contracts are resold at a loss. 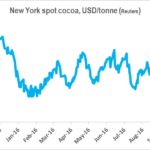 Revenue stability for farmers is key

Côte d’Ivoire currently operates a price stabilisation mechanism which guarantees an income to producers equivalent to at least 60% of the CIF price for cocoa over the course of a particular season. This has replaced the former liberalised system which was in place between 2000 and 2012. According to government estimates, the new system has significantly improved the quality of Cocoa exported. Côte d’Ivoire is the largest cocoa producer in the world, accounting for around 40% of global cocoa output. The cocoa market has been on a rollercoaster ride and has traded within a band of USD 2,800 and 3,200 per tonne this year. Spot prices in New York were trading at around 2,815 per tonne on Tuesday.