How to engineer a supply squeeze

Global supply of meat, including chicken, is likely to be significantly strained following revelations that Brazil may have been exporting tainted meat. Earlier this week, it emerged that industry inspectors in Brazil had accepted bribes to allow the sale of below par meat products.

Brazil is the largest exporter in the market and accounts for 20% of meat and 40% of chicken exports globally. Brazil’s export sales were estimated at around USD 14 billion in 2016 and its three largest markets are Saudi Arabia, China and the European Union.In Africa, South Africa and Egypt are large consumers of Brazilian meat products (see trade map below). 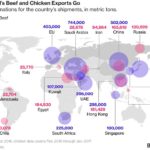 no reports of poisoning linked to the scandal, some slaughterhouses have been accused of deliberately adulterating some finished products. China, the EU, Japan, Chile, Egypt and a host of other importers have restricted the import of Brazilian meat.

Why does it matter to Francophone Africa?

These developments have important implications for Francophone African markets. Although direct meat trade with Brazil is muted, the region nonetheless imports around USD 500 million worth of chicken annually as it struggles to cope with rising demand for protein.

Regional supply of meat and chicken is struggling to keep pace with demand due to agribusiness infrastructure deficits – production is typically artisanal.The scrutiny that large meat importers are now putting on Brazilian supplies raises the risk that alternative sources of supply will be diverted away from African markets, putting pressure on consumer prices. This, at a time when the resurgence of avian flu in parts of China and the US is spooking consumers.

Live cattle futures have already moved higher on the Chicago exchange with the front month currently trading at around 122 US cents per pound up from 117 US cents at the start of the March.