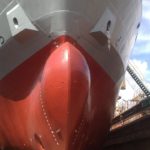 The Export Import bank of China (China EXIM) has approved a US$ 547 million loan to finance the second phase of the deep seaport in Kribi, Cameroon. The first phase of the project, which cost US$ 568 million, was similarly (largely) financed by China EXIM with a 15% participation by the Government of Cameroon. The project, which will take an estimated 42 months to complete, will focus on a linear quay, the extension of the protection dike, the construction of a container terminal and a 30 hectare storage zone. The loan from EXIM China will have a 20 year tenor and will be on concessional terms of 2% a year. Elsewhere, we note that Cameroon’s debt stock has risen sharply (up an estimated 25% to CFAF 6 trillion) since troughing in 2007/08 following its Highly Indebted Poor Country debt completion.

Franc opinion: We believe these infrastructure developments can significantly boost trade volumes out of Cameroon and indeed from the region.We recall that the construction of warehousing capacity forms an important node in structured trade financing and may further help in developing ancillary trade products in the region. We recommend financial intermediares in the CEMAC and Ecowas region track progress and offtake keenly for opportunities.