Cameroon’s SNH grateful for improvement in oil prices; other CEMAC producers too?

Moderately higher oil prices between Jan-Apr 2017 helped cushion the impact of lower energy output in Cameroon after the state oil company – better known by its french acronym SNH – reported a 32% increase in revenues transferred to the state compared with the same period last year.

SNH sold 5.76 million barrels of crude oil over the period, down 30% y/y while at the same time it transferred XAF108.5 billion to the state after accounting for production costs.  SNH also revealed that reven 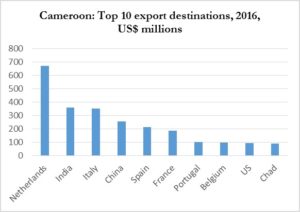 ues generated from the Chad/Cameroon oil pipeline amounted to XAF9 billion between Jan-Apr 2017.

The oil market is currently trading below $50/barrel due to a global supply overhang, which may impair the fledgling improvement to terms of trade in the entire CEMAC region experienced at the start of 2017.

More constructively however, data from the US Energy Information Administration indicate resilient oil output in the region in 2016, notably in Cameroon and Congo Brazzaville. A Bloomberg survey of traders suggests shipments to Asia will increase in June with strong demand from India, China and Indonesia. 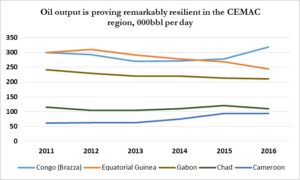 2 thoughts on “Cameroon’s SNH grateful for improvement in oil prices; other CEMAC producers too?”