South Africa may export food inflation to West African markets if traditional importers are not nimble enough to look for alternative sources and solutions in a global market awash with opportunity.

A spike in South Africa’s food inflation
South Africa’s agriculture is being pummelled by a debilitating drought with temperatures expected to remain above normal until December according to the national weather service. The situation has compelled Water and Sanitation Minister Nomvula Mokonyane to call for a reduction in water use to avoid a ‘collapse’ in the country’s water system. The adverse impact from the weather on South Africa’s agriculture sector has fuelled food inflation which rose 11.6% year on year in August.

The drought has a number of implications for agriculture which spill beyond south Africa’s borders. South Africa is traditionally a net grain (corn and wheat) exporter. However, the drought, which is linked to the el Niño weather pattern, has dented corn output in the 2015/16 season by over 40%. The US Department of Agriculture estimates that South Africa imported 3 million tonnes of corn in 2012/16 season, its largest in 24 years. 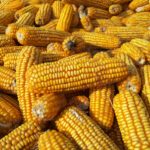 Cameroon, Cote d’Ivoire, the Democratic Republic of Congo and Togo are some of the countries that import corn from South Africa, mainly for food. However, trade in agricultural commodities between South Africa and its import partners may be squeezed by smaller exportable surpluses from the region as farm yields suffer.

Buy SAFEX December corn futures
Corn importers still exposed to the South Africa should take advantage of the recent declines in the market and buy December futures which we believe have only been pressured lower by a sluggish US market. We do not expect the recent downtrend to be sustained particularly if the current spate of dry weather continues.