Questions over the CFA franc’s peg to the euro; and XAF/XOF parity

A Franctrade survey suggests that the CFA franc’s peg to the euro will remain a major theme for business and industry leaders in the region in 2019 with many participants taking the view that a devaluation of the currency is now a matter of “when” not “if”. Further, the probability of a change to the parity between the central and west African CFA francs (XAF vs XOF respectively) is likely to feature heavily in regional strategy in the year ahead—currency markets data show that XOF traded at an average premium of 6.6 francs to XAF in 2018 which may be indicative of relative market confidence in the EUR/XOF peg compared with the EUR/XAF arrangement.

As previously discussed (See Averting a crisis… Franctrade.com, December 2016 and  The CFA franc devaluation debate…, Franctrade.com, June 2017), the experience of Nigeria, Angola and Egypt suggests that a currency “devaluation” should no longer be considered a “dirty word”, even in the CFA franc zone; and for many in the region a devaluation, as part of broader economic reforms, is seen as structurally progressive. That said, we opine that the region’s weak manufacturing base, rather than national (or indeed international) political will, remains key to why this policy option has not yet been prioritised.

Commodity prices—Brent crude oil down by more than 40%

The recovery in energy prices in the second half of 2017 handed the region a financial and economic lifeline but the sharp drop in the market since October 2018—Brent crude fell over 40% between October and Christmas eve 2018—will undermine foreign exchange reserves. Therefore, the trajectory for crude oil prices takes on additional importance in 2019, as will price trends for other trade-sensitive commodities like cotton, gold, cocoa and palm oil.

Participants take the view that geopolitical risks in the region would weigh on the investment climate, with a bearing on domestic and foreign liquidity. If unresolved, this can have far-reaching effects including on monetary policy, private credit extension, FX policy, debt sustainability and, ultimately, economic growth. With reference to Cameroon, debt-capital markets have made a volte-face on the country’s debut 10-year 2025 bond with yields widening to around 8.75% in October, from 6.3% at the start of the year. This validates concerns we raised in June 2017, as investor bullishness created a best-performer in Cameroon debt (See Are Cameroon’s stoic financial markets downplaying unquantifiable politics?). 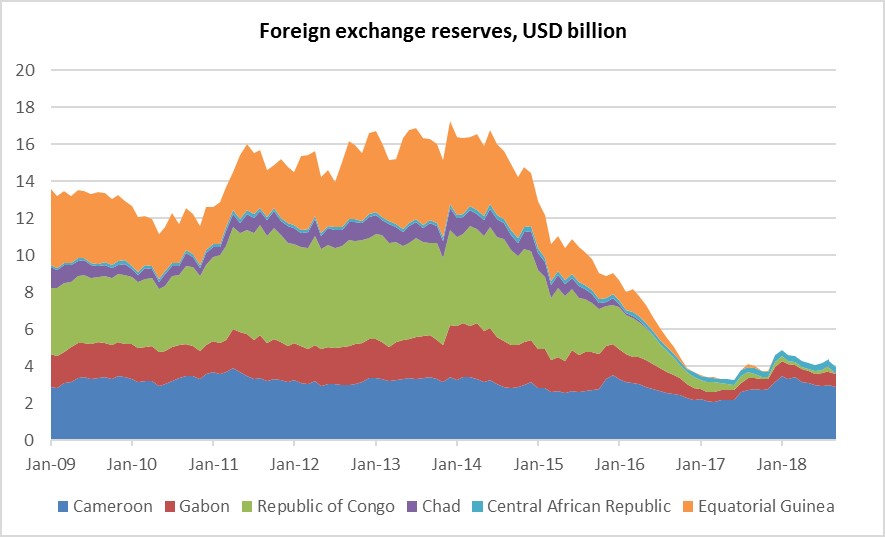 One Belt One Road

The perception of inefficiencies in the construction sector could challenge China’s Belt and Road initiative in some parts of the region, although the expectation is for policymakers to increasingly focus on raising accountability as a way to attract much-needed foreign direct investment. Elsewhere, monetary policy normalisation in the US and Europe could impact flows to the region although the more hawkish stance adopted by the Central Bank of Central African States- raising policy rates by 55bps in October to 3.5%–could mitigate outflows.