The US Intercontinental Exchange (ICE) has delisted its world cotton contract (effective June 12) which it introduced in 2015 as an alternative to the US cotton no. 2 contract and in a bid to inject greater dynamism into its cotton futures market heavily biased towards US cotton/deliveries.

The rationale behind the introduction of the world cotton contract (CWT) was compelling – the US accounted for a smaller share of world cotton exports and a world cotton contract would aid price discovery for non-US cotton with delivery points outside the US. However the contract appeared doomed from the start with low liquidity, a high bid/offer spread and only tentative interest from market participants.

A missed opportunity for the African region? Perhaps 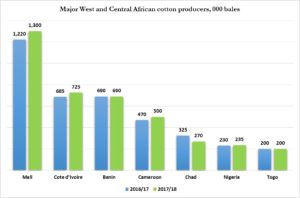 Despite the hype that accompanied its launch, the lack of delivery points in West Africa may have disappointed producers in the region (West/Central Africa) who currently account for around 10% of global exports up from 5% in 2010. Moreover, established commercial relationships in the region’s physical market, involving largely Asian buyers, and asymmetric information among participants may have worked against benchmarking against CWT, which typically traded at a premium to the US cotton contract.

ICE has stated that it will continue to consult with market participants regarding the possibility of re-listing the contract for trading in the future and on any changes to the current contract terms that could be made prior to any potential relisting. These are encouraging noises but ICE must also attempt to better engage markets in West Africa as part of any remedial action.

Outside China, fundamentals in the cotton market could be undermined by relatively firm West African output and a bumper cotton crop from the US where the US Department of Agriculture is forecasting the largest crop in a decade in the 2017/18 season. This poses significant downside risks for cotton prices particularly against still-weak global growth and competitively priced synthetic fibres. Cotton producers should consider locking some forward sales at current levels. In equity markets, potentially lower cotton prices should translate into lower costs for listed garment makers although this should be viewed against the prism of weak consumer spending across a swathe of developed and developing countries.

Is the cotton industry hedged against an eventual decline in prices?