Your pastry just got more expensive: dairy and sugar prices rise in September

Food prices up to their highest level in 16 months 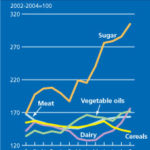 mber compared with August, its highest level in 16 months. The rise is largely due to higher sugar and dairy prices with the FAO sugar and dairy sub-indices rising by nearly 7% and 14% respectively month on month. According to the FAO, the current price surge in dairy stems from concern that falling milk production in the European Union and a muted opening to the dairy year in Oceania would result in tighter exportable surpluses.

Sugar prices have been boosted by adverse weather conditions in Brazil’s Centre-South region which produces the bulk of the country’s sugar. Brazil is the largest sugar producer and exporter. Reports of lower production in India – on account of smaller plantings – and tight supplies in Thailand and China are also underpinning the market. India is the second largest producer and top consumer of sugar. 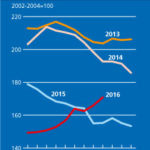 global output and large exportable surpluses. Louis Dreyfus expects grain prices to remain sluggish through to 2017 due to high productivity in the US and a continuous expansion in production by Black Sea grain farmers.

Charts are sourced from the UN Food and Agricultural Organization